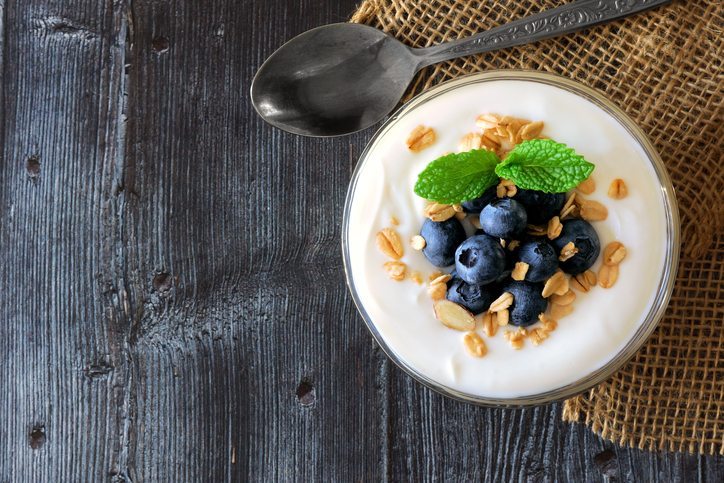 At McKinney Smiles, Dr. Lawrence always likes to remind patients about the importance of eating a balanced diet. While cutting back on the amount of sugar we eat helps to lower our risk of tooth decay and gum disease, your dentist in McKinney also wants patients to know that adding certain foods to a diet can also offer similar benefits. One of these types of foods may be yogurt.

In a new study of over 6,000 adults in South Korea, researchers discovered that participants who ate less yogurt had a higher risk of developing periodontal disease, or gum disease. While the study did find an association, the direct connection between yogurt consumption and periodontal disease still eludes researchers. The team noted that neither drinking less milk or a lower calcium intake had any significant connection to lowering an individual’s risk of periodontal disease.

This note led researchers to state that while eating more yogurt did lower the risk of periodontal disease for the Koreans involved in the study, the calcium contained in the yogurt was not the likely cause.

Calcium Intake Not the Solution

A chronic inflammatory disease, periodontitis can cause the destruction of the gum tissue and bone structure that holds our teeth into position. Periodontitis is a severe form of gum disease and the leading cause of adult tooth loss in the U.S. Since periodontitis has a number of documented causes, researchers wanted to determine whether a low calcium intake and consuming less yogurt and milk were potential causes for the disease.

Researchers relied on data collected as part of the 2009 Korea National Health and Nutrition Examination Survey that polled over 6,000 adults over the age of 19 who completed a nutrition survey and underwent a periodontal exam. How often the participants drank milk and ate yogurt was asked as part of the food frequency questionnaire. The amount of calcium participants consumed was calculated from dietary data collected during 24-hour recall interviews.

Once examined, the data showed that participants who consumed less yogurt had a higher risk for developing periodontal disease. However, the research team also noted that neither less milk intake or lower calcium intake had any significant impact on periodontitis rates. Researchers found no difference connecting yogurt intake with periodontitis associated with gender, age, or a smoking habit.

Conventional wisdom would seem to suggest that eating more yogurt would thereby increase the amount of calcium the body could use to strengthen bones and tooth enamel. But since the study found nothing to connect calcium consumption with improve resilience to gum disease, what’s behind this association? The answer may be probiotics.

Researchers believe that probiotics – often found in high amounts in yogurt – maybe what inhibits the growth of harmful bacteria responsible for gum disease.

A 2008 study published in the Journal of Periodontology was one of the first to support this idea, and over the years more conclusive evidence regarding an individual’s diet on periodontal health as taken form.

The idea that probiotics may help improve our oral health is one that will require further study. However, researchers are optimistic that examining how probiotic strains may influence bacterial development and the body’s inflammatory response could lead to a future where diet plays just as an important role in protecting our oral health as brushing and flossing.

So while visiting your dentist in McKinney, combined with brushing and flossing daily, still ranks as the most effective means of protecting your oral health, keep in mind that what you eat may be just as important as how often your brush.