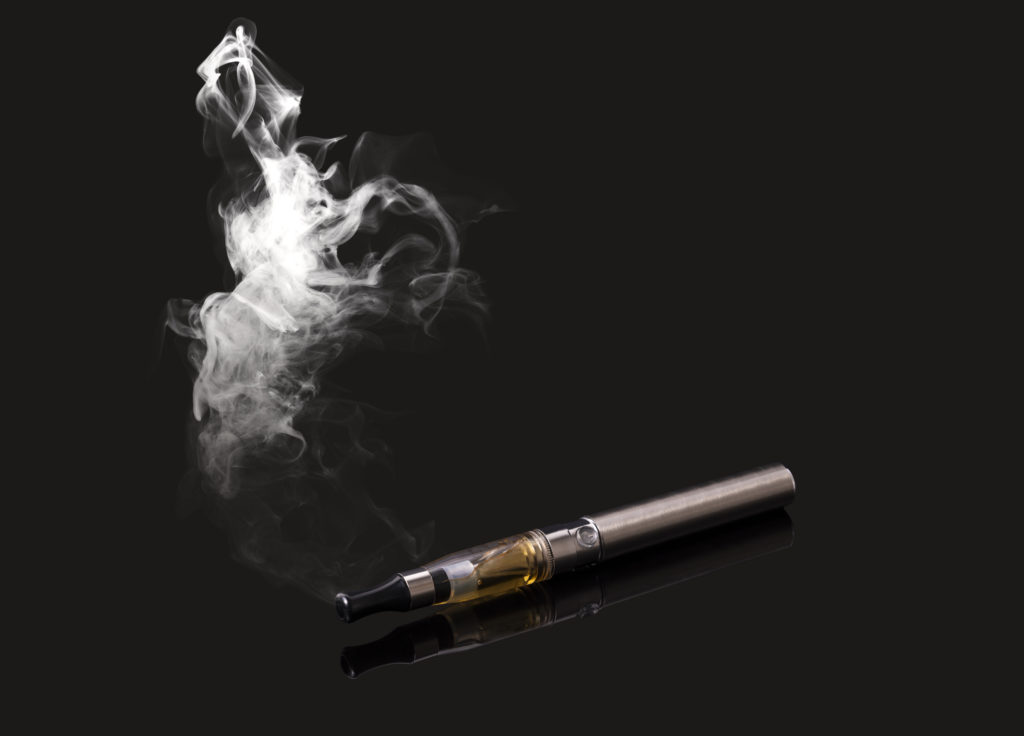 At our family dentistry in McKinney, Dr. Lawrence hopes all of his patients understand the risks associated with smoking. By now, we should all know that smoking increases our risk for gum disease, tooth decay, chronic bad breath, and tooth loss. That’s just the oral health issues associated with the habit. A holistic view of what smoking does to the body shows an increased risk for lung disease and cancer. Obviously, smoking ranks as one of the most self-destructive habits any of us could choose to engage in.

Many Americans agree that smoking is just too dangerous a habit, a stark contrast from the Mad Men days where men and women alike smoked despite growing concerns over cigarettes. Cigarette smoking among U.S. adults reached an all-time low of just 13.7 percent in 2018, a decline of roughly two-thirds since the Surgeon General’s first report on the dangers of smoking. As a country, we seemed to be moving in the right direction, until along comes vaping.

E-cigarettes use, a habit commonly referred to as vaping, was marketed at offering a safer alternative to traditional smoking. As a result, the number of e-cig users swelled until now one in 20 Americans vape. However, a new study from Ohio State University finds that just a couple of months of regular e-cigarette use can cause serious damage to an individual’s oral health.

The Risks of Vaping

Despite their slick packaging and novel flavors, e-cigarettes remain just as destructive to our oral health as their traditional tobacco relatives. After examining the mouths of seemingly healthy habitual e-cig users, researchers discovered a significant amount of “potent infection-causing bacterial organisms.” This type of oral bacteria places e-cig users at a higher risk for developing a variety of oral health problems, ranging from gum disease to cancer.

While none of the study participants had fully developed in any oral health problems yet, the composition of their oral bacteria closely matched that of individuals with periodontitis, a severe form of gum disease and primary cause of permanent tooth loss in adults.

Significantly, researchers discovered that even e-cig users who avoided nicotine show the same oral health warning signs. This suggests to researchers that oral health problems caused by vaping are not related to nicotine at all, but rather from the heated and pressurized liquids used in vape cartridges and e-cigarettes.

As part of the study, researchers collected plaque samples from the gums of 123 people who showed no signs of poor oral health. Among the participants, 25 only smoked cigarettes, 25 were non-smokers, 20 were e-cig users, 25 were former smokers who switched to vaping, and 28 both vaped and smoked cigarettes.

A healthy mouth contains millions if not billions of strands of bacteria. Most of this bacteria plays a helpful role in keeping our mouths healthy.

After collecting plaque samples from the participants, DNA deep sequencing was conducted to identify the different types of bacterial microbes residing in a subject’s mouth.

Among younger participants (those between the ages of 21 to 34) who had never smoked prior to vaping for between 4 to 12 months, researchers were stunned by their discovery. The participants “microbial communities” showed significant levels of stress, as evidenced by a mucus-like slime. Basically, this showed that the bacteria being introduced into the mouths of vapers was being seen as a foreign threat by the immune system, triggering the development of inflammation. Vaping was causing the user’s immune system to attack the body, resulting in the type of inflammation that leads to gum disease and tooth loss.

At our family dentistry in McKinney, Dr. Lawrence strives to protect the oral health of all his patients. Vaping works to quickly destroy a healthy mouth unlike any habit researchers have ever seen before.

Other research has already found that e-cigarette use leads to an increased risk for oral cancer, further dispelling the notion that vaping in anyway decreases the risks associated with smoking.

If you want to enjoy a healthy smile that lasts for a lifetime, the one thing we can recommend to you from our family dentistry in McKinney is avoiding vaping at all costs. The habit will destroy your smile, it’s only a matter of time.